The Cornish Biodiversity Network is a new and much improved recording system for Cornwall which we hope will cater for the needs of all recorders and all those that need access to Cornwall's biological records.

The CBN is designed to be the leading on-line resource for wild plants and animal data, providing easily accessible information on the wildlife of Cornwall and the Isles of Scilly, on land and offshore, and assisting with all activities concerned with their study.

The CBN is a central online repository for Cornwall's biological records, which for many, particularly terrestrial, groups holds the most up to date information available. This database stores over 4.26 million individual sightings of wildlife, covering 28,943 different plants and animals and grows at an average rate of 200,000 records per year, making Cornwall the one of the most productive regions in Britain for recording wildlife, and the most comprehensively and intensively surveyed.

The CBN is managed and run by the biological recording community for the benefit of that community, led by a Steering Group. It is properly constituted and has set up a Community Interest Company. The CBN is driven by the need to improve what we, as recorders, do, how we do it and the services we provide. It has been set up to invest the lions' share of the income it will generate into the biological recording community itself.

The flowering plant and fern names used by the ERICA database have been updated to the taxonomy of Stace's New Flora of the British Isles: Fourth Edition.

The total number of records held within the ERICA database reached 4,250,320 (including 2,259,536 flowering plant and fern records). The Cornish list also increased by an astonishing 889 taxa.

2018 was the second best year ever for the ERICA database with just over 250,000 biological records added (including 123,123 flowering plant and fern records). The Cornish list also increased by 406 species.

The 4 millionth record has been computerised

On December 10th 2018 the 4 millionth record was computerised. It was a Green-veined White butterfly recorded on Gwithian Green during Butterfly Conservation transect monitoring.

The ERICA database grew by 203,000 records in 2017 maintaining the long-term average. Remarkably the number of species on the Cornish list grew by 409.

The ERICA database has grown by 100,000 records so far this year (as of 01/08/2017). As the rate of data acquisition is normally greater during the second half of the year, it is anticipated the total for 2017 should exceed 200,000 records, maintaining the long-term average.

The 2 millionth flowering plant and fern record for Cornwall was been added to the ERICA database on 03/06/2017. It was a Small-flowered Catchfly (Silene gallica) recorded at Trevose Head.

In the first two months of 2017, the ERICA database, which forms the core of the Cornish Biodiversity Network, grew by 57,000 biological records and 156 new taxa have been added to the Cornish list. This includes several moths, sea beans, algae, a couple of flowering plants and dozens of marine organisms.

When one considers that in 2016 ERICA grew by 212,427 records and 424 new taxa were added to the Cornish list, 2017 has certainly got off to a flying start, thanks to the dedicated and highly skilled Biological Recording Community in Cornwall. 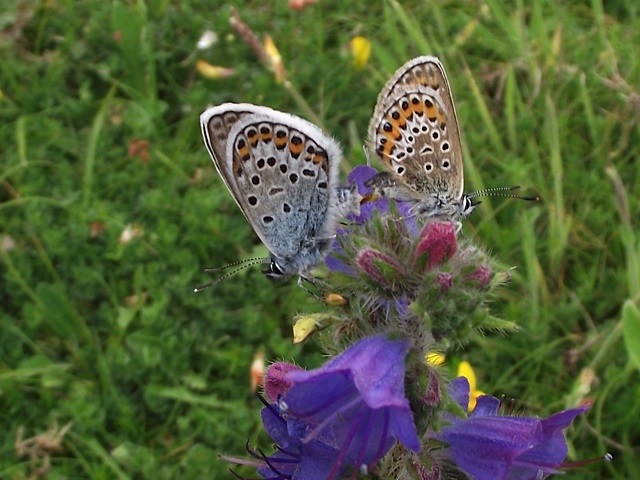 
The Cornish Biodiversity Network is pleased to acknowledge support from: